The IBCA (International Braille Chess Association) has entrusted France with the organisation of the World Individual Chess Championships for blind and visually impaired women, and blind and visually impaired youth. The town of Castelnaudary and the community of communes Lauragais Audois have enthusiastically applied to host this unique competition in France from 10 to 17 July 2022.

The competition and its organization

IBCA is present in Castelnaudary and covers the event with videos, photos and interviews filmed by president’s Charudatta Jadhav’s daughter Ruana.

Some videos : Interview of Laurent KRUK, Organizer of the Tournament

A selection of pictures taken during the competition

How do Blind People Play Chess?

A game board and adapted pieces: The Chess Game can be perfectly practiced by blind people using an adapted chessboard allowing them to touch the pieces without knocking them down. In practice, in order to allow both opponents not to hinder each other, two sets are used, both of them having of course to keep an identical position. The use of two games makes it quite possible for people with disabilities to play with another blind player or a sighted one. The rules of tournaments incorporate this specificity. It is not uncommon for blind people to take part in major competitions.

During a chess game, to assess the situation, think and play his moves, a blind player needs to touch the pieces on the chessboard and that’s a difference of rule with a sighted player who is not allowed to touch the pieces except to play his move. In order not to hinder his opponent during his reflection, he has a separate game at his disposal. And in order not to risk knocking over the pieces, this game is adapted. The pieces are placed on the squares in the middle of the board by means of a tenon. The black squares are slightly raised (one to two millimetres) to clearly distinguish the grid formed by the white and black squares. The black pieces have a sign to distinguish them from the white pieces, usually a pin or a relief at the top.

The clocks used to count down the playing time are electronic talking clocks allowing each player to be autonomous. They have headphone sockets so as not to disturb the other players. 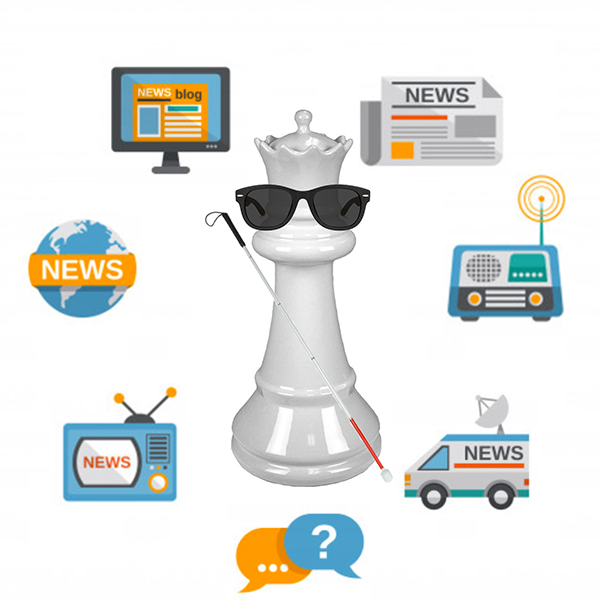